Pot of Gold Estate Liquidation Auctions is proud to present an exciting collection of Native American Indian artifacts and regalia. In our Aug 25th on-line only auction and continuing through our Sept 1st, 15th, and 26th 2015 auctions you will find an amazing array of authentic, both historic and contemporary, items that are unique and rare.  END_OF_DOCUMENT_TOKEN_TO_BE_REPLACED

Since then model trains have become a niche attraction point for people of all ages. For some, “backyard” train sets, large enough to seat people, but small enough to not be considered a commercial operation are a lifetime work in progress, with pieces of track, and scaled down monuments added whenever the “conductor’s” budget allows.  Fortunately for these hobbyists, there are companies that specialize in this, and whose sole purpose is to help keep the dream of owning one’s own train alive and chugging along (Come on…one train pun is okay, right?).  (Read On…)  END_OF_DOCUMENT_TOKEN_TO_BE_REPLACED

Nearly two decades before Arizona would become an official State, in the late 1800s, a man of German heritage came to the area of Payson, Arizona to stake his claim on the dream that would become the United States.  Joe Meyer, or “Dutch Joe” as he was known, homesteaded a section of land in the northern part of Arizona.  For some 60 years, falling somewhere in the period 1870-1928, “Dutch” Joe created history and legend on his land before he died a somewhat mysterious death at the age of 82.  (Read on…)  END_OF_DOCUMENT_TOKEN_TO_BE_REPLACED

END_OF_DOCUMENT_TOKEN_TO_BE_REPLACED 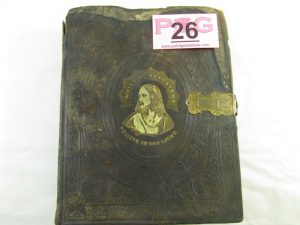 A family reunited with an heirloom

Ann Abbott-Stong and her family traveled all the way from Colorado in hopes of being reunited with the family bible.

This unassuming leather bound book becomes a huge blessing connecting the past with the present:

1864 Family Bible w/ Genealogy & Photos
A Holy Bible containing the Old and New Testaments which was published by John Edwin Potter in Philadelphia in 1864. In 1868 the Bible was presented to Peter V. Van Arsdale by his father. The Bible contains 768 pages, is leather bound with a metal clasp lock. The pages between the Old and New Testament contain a fascinating family genealogy and family portraits. There are several loose items in the Book as well, a couple of locks of hair, a peacock feather, news clippings, and other items. Book is well worn due to age and use, the leather cover is worn and some of the pages have foxing.

Watch this heartwarming story of how one of our bidders used her love of genealogy to track down the family of which this 150 year old Bible holds the family history.  Grab a tissue and enjoy!