Nearly two decades before Arizona would become an official State, in the late 1800s, a man of German heritage came to the area of Payson, Arizona to stake his claim on the dream that would become the United States.  Joe Meyer, or “Dutch Joe” as he was known, homesteaded a section of land in the northern part of Arizona.  For some 60 years, falling somewhere in the period 1870-1928, “Dutch” Joe created history and legend on his land before he died a somewhat mysterious death at the age of 82.  (Read on…)

Local verbal history, as told by area old-timers, says that Dutch Joe, who was reported to be a “loner” and a confirmed bachelor, lived in a cave on the Ranch until he could build a cabin, ran a few cows and horses, and even operated an alcohol still on his 38 acres.

“Bootlegger Canyon”, as the area became known, also saw the operation of another entrepreneurial enterprise on the ranch nearby.  Locals say that Dutch Joe ran an establishment of “ill repute”, or sometimes called a “Bordello” on the Ranch.   History has it that even in these remote parts of Arizona competition may have been fierce for the Liquor and Ladies, and within a week’s time two rather mysterious deaths occurred on neighboring “Ranches”.  Pappy Vincent, owner of the Vincent Ranch was killed on his property and a short time later Dutch Joe was found “frozen to death” at the south entrance gate to the Ranch on January 15, 1928.

While no direct connection has been made to the coincidental deaths, much speculation has been entertained as to the series of events that led to their deaths.  Both men were listed on their death certificates as “Ranchers”, and while they may have had a few heads of livestock, apparently, in those days, being a Rancher may have covered a lot of interesting activities.  To add to the legend, the land has also been linked to ownership of the “Aztec Land and Cattle Co.”, better known as the infamous “Hashknife Outfit”. ..but, that is a story for another day.

Dutch Joe Meyer’s homestead was later purchased by a family of the name Erramuzbe, and cattle, sheep and horses have been grazed on the homestead almost continually thereafter.  Over time, due to the lack of fences, Dutch Joe’s grazing expanded into the nearby forest.  The U.S. Forest Service ultimately created the nearby 43,000 acre Wallace Grazing Permit.

Flash forward through several subsequent ownerships and property lines of the Dutch Joe Ranch, and to Richard E. “REB” Bunger’s purchase of the property in 2001, and we find nearly 1,200 acres of land in addition to the 43,000 acres of Grazing Land all held under one name. 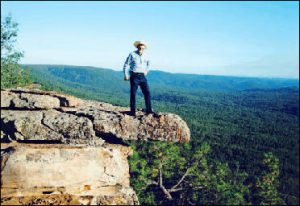 REB was a forth generation Arizonian.  Bunger’s great-grandfather Sam Bunger Sr. whose forefather’s were traced from the register of the Hebron Lutheran Church in Culpepper County, Virginia, in the early 1700s, and whose great-grandmother, Sara Belle Wilson, who, the verbal family history claims to be a cousin of Abraham Lincoln, came to Arizona in 1914.  Sam’s two sons, Alvin and Sam Jr., came to northeastern Arizona a number of years before Sam Sr.  The verbal family history indicates that Alvin and Sam Jr. were cow punchers working for the Aztec Land and Cattle Co., also known as the “Hashknife Outfit”.  Considering the Hashknife’s notorious reputation, some of the family disputes this information.

REB grew up being taught the dairy, cattle and sawmill business.  He attended 3 semesters at ASU and Grand Canyon College,  before starting a company at age 23 called Corral Industries, Inc.  REB’s two brothers, Gary and Kent, early-on joined up and the brothers created one of the worlds leading design construction companies in the field of cattle feedlot, dairy and waste recovery and its utilization.

REB is the proud developer of numerous U.S. Patents in various fields, and he worked as an advisor to the EPA in its first year of existence during the Nixon Administration.  REB assisted the EPA in developing the first guidelines for the National Pollution Discharge Elimination System (NPDES) program, which is one of the foundation ecological regulations administered by the EPA.  During this period, Corral Industries designed and built John Wayne’s Red River Ranch located south of Phoenix near Stanfield, Arizona, which ultimately held 93,000 head of cattle.  REB, through Corral Industries Inc., designed and built hundreds of projects worldwide, including some of the most cutting-edge concepts and designs.  Several of the feedlot facilities designed and built by Corral Industries, Inc. contained from 100,000 – 200,000 head of cattle, making them the largest in the world during that period.  One of REB’s prime focuses was on methods that reused and managed run-off contamination and conversion of waste products into valuable resources.  REB ran his personal cattle company, the Diamond B Cattle Company, in various states, and REB was one of the original charter members of the Texas Cattle Feeders Association.

In 1983 REB was the founder of Mobile Mini, Inc., which business is a concept of portable storage, portable office structures and telecommunication shelters. It is now the world’s leader in its field, with 121 branches in most large cities in the U.S., and has operations in the United Kingdom, Canada, and the Netherlands.  It also operates manufacturing plants in Arizona, California and 2 plants in Texas.  REB took the company public in 1994.  The company flourished and has become the leading company in the world in its field.  Mobile Mini, Inc is listed on the NASDAC with the symbol “Mini.”  REB resigned as chairman of Mobile Mini in February of 2001, which allowed him to pursue his original interest in cattle, horses, fishing, timber, construction, energy development, forest restoration, conservation and practical Green and Sustainability developments.

In 2001 REB began purchasing ranches in the Apache-Sitgreaves National Forest in near proximity to his father, grandfather and great grandfather’s original territory.  The Dutch Joe Ranch, the Hart Canyon Ranch, the Mogollon Mountain Ranch, the Babbit Winter Ranch and the Black Jack Ranch in Greenlee County, Arizona, were purchased over the next few years, and now collectively comprise approximately 1,139 privately held acres, plus the 43,000 acre Wallace Grazing permit.

In a modern-day expression of the same independent spirit expressed by Dutch Joe a century before, REB worked to create a self-sustaining homestead.

REB’s key objective for these Ranches was to be instrumental in resurrecting and remediating the forest in and around those Ranches, and build facilities that develop full off-the-grid Sustainability and Self-Sufficiency in food and energy, while demonstrating efficient and sustainable use of the Ranch’s resources, plus providing an island of peace and quiet that people of all types can come to and find peace, contentment and security – – and, most importantly, a place where children, youths and families can come into healthy contact with nature and learn about Arizona History, Self-Sufficiency and Sustainability, and then, using the values and hard working principles taught by our forefathers, to build a better and more environmentally responsible, sustainable, self-sufficient and secure life for themselves and their children.  While creating his vision REB purchased a large quantity of wagons, buggies, surreys, and the like from various locations, including The McElhaney Cattle Co Museum in Yuma, AZ.  It is these items that will be sold at Pot Of Gold Auction beginning in November 2014 and concluding in February 2015.

REB passed away at the age of 76 in early 2014, before he was able to fully realize his dream, but his legacy and that of the Dutch Joe Ranch can continue on in the memories that continue to be made, both on the Ranch and with the beautiful wagons and buggies that are yours to own by bidding on them at Pot Of Gold Auctions!  Look for #POGBungerEstate on Facebook & Twitter to follow all the Social Media posts! 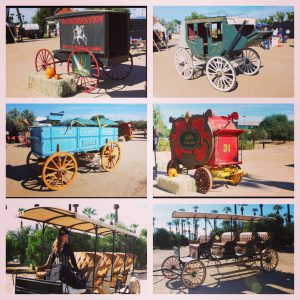 Sources for this Blog: