What is a coin die?  A coin die is one of the two metallic pieces that are used to strike one side of a planchet or coin blank. A die contains an inverse version of the image to be struck on the coin. Modern dies made out of hardened steel are capable of producing many hundreds of thousands of coins before they are retired and defaced. Over time, polishing and usage, dies become weak resulting in weak “strikes” on coins which can also be known as anomalies or errors which can affect the collectability and value of certain coins depending on several factors. 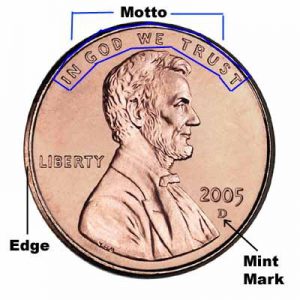 At this time, you may be asking where am I going with this information?  Well, one of the most widely collected US coin series is the Lincoln Cent and one of the most sought after dates is the 1922 Plain (no mintmark). All 1922 cents were struck at the Denver Mint and there are several dies that produced cents with little or no trace of the D mintmark visible. A missing mintmark error occurs when the mintmark is rendered invisible by one of three identified ways … equipment deterioration, malfunctions, or intentional intervention. If the mintmark on the die is filled, plugging up the cavity into which the planchet’s metal flows under the pressure of the strike, the mintmark will be weak or invisible. The 1922 no D mintmark Lincoln cents are results of this phenomenon.

The coins most valued by collectors are from the marriage designated as Die Pair 2. It is also commonly referred to as the Strong Reverse variety. Die Pair 2 may be identified in part by the total absence of any trace of the D mintmark. Take a look at the coin featured as Lot #156, in the August 5th, 2014 auction and compare some of these features: The second 2 in the date is clearly defined and strong. The digit 9 is somewhat mushy. The lower front portion of Lincoln’s coat is weak and shallow from the same heavy die polishing that effaced the mintmark from under the date. The motto IN GOD WE TRUST has a distinctive look as well. The letters of IN GOD are very mushy, even on uncirculated examples, and spread out toward the rim. The word WE is stronger and more clearly defined, but still has a decidedly worn appearance. There is an obvious and marked contrast between these first three words in the motto and the last, TRUST. Its letters are clearly defined and separated from the rim.

Who knew that errors could be so valuable…and historically interesting?  And what a pleasure it is for Pot of Gold to be able to offer this rare coin in Very Fine condition exhibiting all the details of a well preserved part of US coinage history.  Happy Bidding!