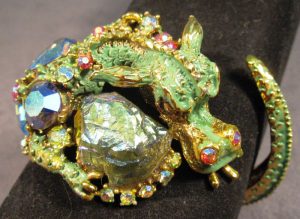 This fabulous dragon bracelet and earring set is a perfect example!  Available for bids in the October 19, 2010 auction catalog.

A little known designer costume jewelry maker, “HAR”, was based in New York, and was only in business for a few short years in the 1950’s and 1960’s.  This dragon bracelet (with matching earrings), is one of their signature pieces, and was even featured in Judith Miller’s 2003 Collectors Guide (page 164), as valued at $700-$800!

While not much is known about Hargo Creations, it appears as though it was founded in 1955 by husband and wife, Joseph Heibronner & Edith Levitt, and that the “HAR” trademark was only used for a span of ten years.  The most likely reason for this is that Joseph passed away in 1968, and Edith must not have continued the business without her husband.

Their creations are well made with fine metalwork and include stones called lava rocks, and aurora borealis, that enhanced the exotic nature of their highly sculptural creations.

Gorgeous, unusual, and a wearable piece of American history!